The Club was founded in 1914 and its cardinal objective was to “bind together in one organisation Liverymen of the various Guilds by bonds of common interest in defence of all the citizens hold dear…in service to the ancient Corporation and in maintenance of the priceless City churches.” Little has changed since then and membership of the Club is representative of practically all the Livery Companies who still make up the bulk of the membership.

The Club’s original meeting place was at De Keyser’s Royal Hotel. Sir Polydore de Keyser was a Belgian waiter who came to London to make his fortune. He built the 400 room hotel in 1874 near Blackfriars on the site of the current Unilever House. The hotel hosted many Guildhall banquets and was the first meeting place of the City Livery Club, before being demolished in 1930-1. Having received British nationality, de Keyser became Lord Mayor of London in 1887, the first Catholic to be elected to the office since the Reformation.

After De Keyser’s Royal Hotel, the Club moved to St. Brides Foundation Institute, which was completed in 1894 to the designs of R. C. Murray. This was followed by Williamson’s Hotel in Bow Lane which was occupied by Lord Mayors of London until around 1740. The wrought iron gates at the entrance were a gift from William III who dined with Queen Mary as the Lord Mayor’s guests and are monogrammed with the letters WM, and they can still be seen today (see photo to left). On 1st January 1927 the Club’s next move was to the Chapter House in St. Pauls Churchyard (right), which was built to the designs of Wren in 1712-14. This was the Club’s home until 29th December 1940 when, like many London buildings, it was severely damaged by enemy action and many of the Club’s records and effects were lost, but the Chapter House was eventually rebuilt. The next move was to Butchers Hall (built 1884-5) in Bartholomew Close (left), but that too was badly blitzed on the 10th May 1941; however the Club managed to continue to occupy the premises until the end of July 1944 when the Hall was again attacked and finally became uninhabitable. After many months of anxious search the Club moved to Sion College on Victoria Embankment (right) and made this their home for the next 52 years. Many Members regard this period as the heyday of the Club, and many lifelong friendships were forged here.

In June 1996 the Club moved to the Insurance Hall in Aldermanbury, then the Baltic Exchange in St. Mary Axe (named after the Virginia and Baltick Coffee House) until September 2010.   In 2010, the Club moved to Bell Wharf Lane on the River Thames, sharing the facilities of the Little Ship Club.

In August 2020 the Club moved to its current location at 42 Crutched Friars, EC3, near the Tower of London. It shares this splendid location with the City University Club. 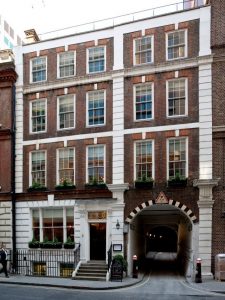