Past Winners of the Root and Branch Award

We are delighted to announce the winners of our awards for 2019: Hugh Adams (Blacksmiths)
for over 30 years’ support for the blacksmith’s craft, and for encouraging working blacksmiths to achieve their goals. John Blauth (Coachmakers and Coach Harness Makers)
for supporting and encouraging young people to enter into the automotive, aerospace and coachbuilding industries, including through wide dissemination of the Coachmakers’ Engineering Guide. We are also delighted this year to make a special Company Award to the Worshipful Company of Poulters
For increasing public awareness of the Livery, raising funds, and providing entertainment through holding the Inter-Livery Pancake Races for 15 years. 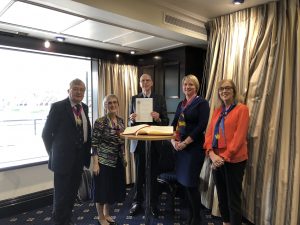 Reginald Brown, nominated by the Worshipful Company of Insurers, for exceptional leadership in supporting students from disadvantaged backgrounds to work in professional careers in the City. Bill Clark, nominated by the Worshipful Company of Woolmen for establishing the annual Sheep Drive over London Bridge as a successful means of raising funds for charity and increasing the profile of the Livery. Keith Lawrey, nominated by the Worshipful Company of Hackney Carriage Drivers, for his invaluable advice to over 25 Livery Companies on petitioning for their respective Royal Charters. Penrose Halson, nominated by the Worshipful Company of Turners of London, for a long history of commitment to the Livery including the creation of the “Wizardry in Wood” exhibitions. Paul has tirelessly promoted the Livery through writing “The City of London Freeman’s Guide” and through use of social media. The Highly Commended certificate was awarded for the development and running of a programme of scholarships for young professionals in the construction industry. Since 1994 Phil Davis has been Chairman of the Children’s Magical Taxi Tour organising committee, and has been the driving force for 21 years behind the annual trip which takes seriously ill children and their families to Disneyland Paris Tom Ilube helped transform a failing school into one rated “outstanding” by OFSTED in 2013, and was a prime mover in working with the Mercers’ Company to found and fund the Hammersmith Academy. A special Lifetime Award was presented to Geoffrey Bond in recognition of his long history of commitment to the Livery. This included initiatives across Livery Companies such as the “Butcher, Baker, Candlestick Maker” exhibition during the Diamond Jubilee, and a project to mark the anniversary of the King James Bible that included a major literacy initiative with school children.